Wiener Schnitzel is probably the most popular dish in Austria, that is dated late 19th century and very appreciated worldwide.  It is traditionally prepared with veal cutlets that are pounded really thin, breaded and fried until tender and crispy. This Schnitzel is traditionally served with lemon and potato salad and is best served right away.

The Viennese potato salad is made with no mayonnaise and is flavored using a vinaigrette made with oil, white wine vinegar, red onion, mustard and sugar. Also chives or parsley are also used to bring extra color and flavor. It is best to prepare the potato salad in advance as it needs time to absorb all the liquid and develop flavor.

In case veal is hard to find, schnitzel can be also prepared using pork or chicken cutlet though in this case can no longer be called Wiener Schnitzel but Schnitzel Wiener Art, meaning a Viennese style schnitzel. 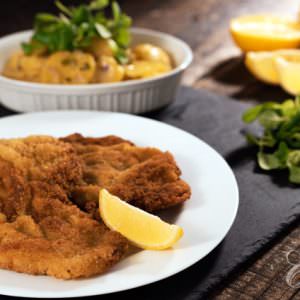